Yep.
I've decided to delight and excite the blogisphere with a sort of diary of my gardening and what happens to the produce!

Check it out here - http://growingcooking.blogspot.co.nz/

Or not, of course!

Posted by Marie at 7:15 PM No comments: Links to this post

Email ThisBlogThis!Share to TwitterShare to FacebookShare to Pinterest
Labels: gardening

And finally, some links -


Posted by Marie at 1:38 PM No comments: Links to this post

My last days on the Chathams

Wednesday I took the opportunity to go to Owenga with the tour group, as it was too misty for their flight to Pitt Island, which put my getting to Pitt at all in jeopardy, as I knew I would be going the day after them.  And time was now running out with Friday - and the flight home - looming large.

Owenga.  Sheep of all descriptions and in all states of shorn-ness, lovely weather -that mist cleared away as the day developed - wonderful beaches (which I think almost goes without saying when describing the Chathams!), and shells.  The sand on the beaches is made of very finely ground shell, and in Owenga the shells were whole - various types of paua, scallops and myriad other fishy homes covered the beach - Shelly Bay in particular.
The jolly company was jolly nice, a lovely group of people, and the lunch at the new wharf at Owenga was welcome.  We saw a Chathams Island parrot - a parea - larger than a kereru - and stopped off at the art studio of Eva Cherie Tuck, local artist.

Thursday and the tour group has gone to Pitt.  It's quite lonely now without them!!  There's not a lot to do here in Waitangi, and after the best part of a week I've done most of it.  This is the commercial heart of the Islands, and the lack of entertainment I've been told by a number of Islanders is why people leave.  Was chatting to a couple of fishermen out from Napier - 2 days out, 8 days fishing, 2 days back - and one was an Islander who said the boredom drove him to leave.  Families leave when the children get to High School age, or else the children leave and board at various schools in New Zealand, usually in a town where they have family.  They are Chatham Islanders though, and a good number of them do come back - to teach at the local schools, to fish, to farm, to work or to raise their own families ("trucks and boats!  A great place for a boy to grow up!") or later on to retire.
The fishing is plentiful, but families are the wealth of this place, and there is plenty of room for them.

So that's my Chatham Islands odyssey all but over.
Would I live here?
No, not me.
Would I return?
Yes.  For a complete break away from the rat race, yes, the Chathams would definitely be high up on my list.  Or a fishing holiday.  The fish really are plentiful and superb!

And I would stay at Hotel Chathams every time!
Posted by Marie at 8:38 PM No comments: Links to this post

This is a seriously good place to chill!

Checked out the museum yesterday - an ecclectic collection that I'm glad I saw.  All adds to my picture of this lovely place.
Since about the 12th century, the Chatham Islands were inhabited by Moriori - there is no evidence of where they came from, but they lived in peace with their unique way of settling grievences = the weapons were no stouter than a man's thumb, and the first to draw blood was the victor.  Fight over.
In the 18th century, sealers, whalers and shipwrecked seamen found the islands, and the population grew to around 2500.  Word spread to New Zealand, which resulted in 900 Maori from Taranaki with their warlike ways and cannibalism arriving by whaling ship.  The Moriori held a hui or conference to discuss how to deal with the troublesome visitors and decided not to change their peaceful ways.  However, the Maori, seeing the Moriori deep in discussion, concluded that they were about to be attacked and got in first, initiating preemptive and ongoing massacres.

Today there's a population of around 500, and I think I've waved to most of them!  The vehicles are almost all utes or 4-wheel drives, thickly coated in yellow road dust from the unsealed roads.  This must be about the most friendly place I've ever been!

Each day I walk for several hours down Waitangi Beach - reminiscent of Porangahau Beach for those who know the vast sandyness of this Southern HB beach. 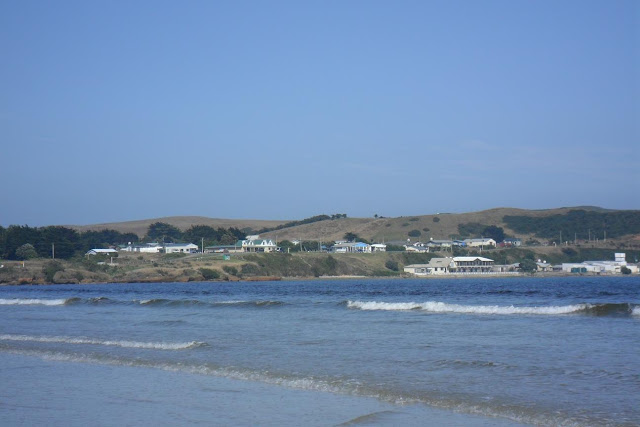 Waitangi Beach is about a minute from the hotel - the waters lap right alongside, but the sandy walking part is a short walk away.
Oh and let me tell you about the Chathams Hotel!
This place is amazing, thanks to its location and superbly chosen staff.  From the moment I arrived to be greeted by Karen the live in house manager, I have been looked after. My experiences of hotels before, has been of generalised impersonalness.  Not Hotel Chathams.  The owner, Val Croon joined me at dinner on Saturday night and asked what my goals were while I was here - had I come to see everything there was to see?  Take time out from the rat race?  Something in between?  He is doing his best to make it happen.  Mostly I just want to be here and to recharge my batteries.  And of all places on the face of God's green earth, this must be the prime place for recharging.  But there are some things I want to see.

There's a tour group in the hotel at the moment, and I can join with them on any excursions I chose.
But I really really don't want to spend every day being driven thither and yon on unsealed roads from one tourist-must-see to the next in jolly company.  Not yet on this trip, anyway.


So I chill out in this piece of heaven, where the local takeaway cooks up blue cod in its fish'n'chips as something normal, where everyone waves, where there is an awesome sense of serenity on the long sandy beach, and where the sea is only about 3 metres from the door of the hotel.


My room is very comfortable, Colleen and Irene the lovely ladies who do my housework (!luxury!) are very friendly without overstepping professionalism, and the meals - holy heck!  There's not a lot to beat panfried blue cod perfectly prepared unless it's the most tender, tasty lamb roast I think I've every eaten, or the ribeye fillet which was done exactly to my taste.....
I can't see that I'm about to lose the weight I gained over Christmas, no matter how much walking I do!

And today, today I bought a painting.  By local artist Eva Cherie Tuck.  It's fantastic.
Yep.  Loving the Chathams!
Posted by Marie at 2:17 PM 2 comments: Links to this post

Today I went on a fishing expedition off Chatham Island.
A small boat, "The Chatham Express" with a knowledgeable young skipper Matt (I guess calling him "young" indicates my own ageing), and Dylan in charge of baiting our hooks and helping with the caught fish - I thought this a lovely bit of luxury!

I seriously lost count of how many I caught - 8 maybe? - all Blue Cod.  Others on board caught many more than me, including hapuka, and there were three fairly big sharks amid the haul.  Matt and Dylan filletted the catch - no idea how many fish in total, but lots!  Probably 70-80 from 7 lines (although seasickness meant one of the lines was not used a great deal).  Fish for dinner tonight at the hotel!
Discovered that our catch will be presented to us in frozen meal lots to take home!  Yum!!

I thank my ancestors for the love of being on boats that I've been blessed with!  That boat on the O'Driscoll coat of arms isn't there just to fill in a space!!!  The faster and choppier the better for me,  - I can take or leave the fishing, but love the boat! - and I cannot sit inside but have to stand on the edge to catch the full impact of wind and spray.  Rather the way a dog with its head out a car window does, and with about the same degree of pleasure!!!
Posted by Marie at 4:53 PM 4 comments: Links to this post

Friday 11 January 2013
I'd been told that the flight schedule between Wellington and Chatham Island was more a case of "not before" rather than "leaves at" so I guess to fly out only an hour and a half late wasn't too bad.  None of us on board seemed to have experienced an "abort take off" though, as the plane was roaring down the runway, and it was very hard to hear the message of the pilot as to the reason, but apparently it was something to do with an engine power check.... 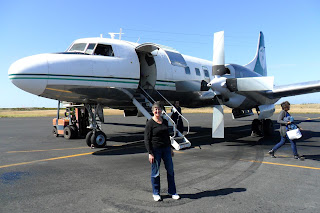 Anyway, here I am, 7.50 p.m. local time, and have had a bit of a tiki tour to get to Waitangi from the airstrip.
Some initial photos:

Well no, there will be no photos!!  Internet here is so slow that uploading of photos is impossible.  So when the pictures appear, you'll know I'm back home!

It's a bit of a culture shock - no facebook, no instant googling, no connection to everything and everyone.  (Facebook recognised that I was trying to log in from a computer I'd not logged in from before.  It gave me those hideous character recognition things and once past that hurdle gave me the choice of verifying myself by cellphone or by correctly identifying five of my fb friends tagged in uploaded photos. Well there is no cellphone coverage here, and the internet is so slow that photos can't be displayed, so that's me and fb not speaking till I hit mainland NZ in a week!)
And I'm thinking this isn't such a bad thing.
I wanted a break, and a total break is what I'm getting!
Posted by Marie at 4:46 PM 1 comment: Links to this post

Email ThisBlogThis!Share to TwitterShare to FacebookShare to Pinterest
Labels: Chathams

Chatham Islands is 45 minutes ahead of mainland New Zealand.
Posted by Marie at 12:03 PM No comments: Links to this post

17 March 2012
Today I booked to fly Air Chathams to the Chatham Islands, the start of fulfilling a very long held dream.  I also booked my accommodation - a week at Hotel Chatham.  I plan to go on a walking tour and maybe the small-plane flight to Pitt Island - although me and small planes aren't the best of friends.  I'm VERY excited!


7 January 2013
Squeeeeeeeeeee of excitement!  Only a couple of days to go!
Added a fishing trip to the list of things to do, and a trip all around the main island, Chatham with a guide.
Posted by Marie at 8:19 AM 2 comments: Links to this post