Intarsia is a style of knitting, usually to create pictures or multi-colour patterns, and in which each different colour (as in the Digger Jacket shown here) uses its own thread.  In other words, the threads are not carried across the back as in Fair Isle knitting.  I have done a fair amount of intarsia over the years, and with grandchildren, have made a couple in recent times.  This is a Spiderman zip up jacket made for James, and I'm now working on this Digger Jacket for Timothy.

I'm doing both fronts and the back all on the one needle, so there'll be no sideseams, and at the moment it looks like this: 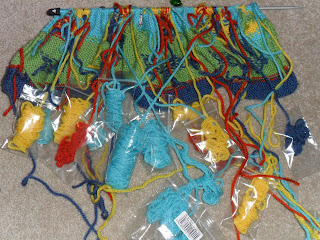 This is the inside or wrong side view but I'm very pleased with the way my little plastic bags have worked out!  For intarsia, one needs separate thread for each change of colour, as the colour isn't carried across the work.  Tangling is very easy!  This time, I have wound each separate yarn around my finger, leaving the "tail" which will be pulled from the inside of the tube of yarn, and slipping each into its own zip lock bag.  It's working well!
One of the key things with intarsia is to keep the tension even - easier to say than to achieve when one is juggling 30 different threads!  And it helps if you DON'T have a playful kitten (or an inquisitive toddler) around while you're working at it!

This was going to be a post about intarsia, but my darling granddaughter Penny has just won her school age group Cross Country, which has stirred up all manner of things, so here I go getting said things out!

I am delighted beyond measure that my grandchildren appear to be natural runners!  Not all of them are running or even walking yet, but those that are do it with great joy!  My children weren't at all bad at sport either.  They didn't inherit that from me.
When I was at school, just as today, everyone had to run the cross country.  Training involved, just as today, circuits of the fields.  On the day of the race, some parents turned up, not as many as today - but that was the nature of how things were back in the day - and stood on the sideline egging on their children.  And, unfortunately, in an era when it was ok to tell children they were hopeless or give them a clip around the ear and tell them they should try harder when in fact they weren't and they couldn't, it was also ok for some of said sideline parents to laugh at the kids who were so far behind the rest of the pack that they were hardly worth standing around for, waiting until they finished, unless it was for the value of a good laugh.  That DOESN'T happen today.  I was fortunate that my parents were never on the sideline, so there was never a rehashing of it over the dinner table.
I have two slightly less horrible memories of cross country - the only time I didn't come dead last (poor Angela was having a really off day!!), and the time I had been lapped by the field TWICE, but came in a lap early, as if I'd only been lapped once.  No one seemed to notice or care, and I felt it was quite brave of me to cut out that last lap saving me from another agonising circuit by myself.

What did such public humiliation teach me?  Certainly not to "try harder"!  I was busting a gut out there desperate, desperate not to be last - and so far last - again.  At High School I became very practiced at writing notes excusing me from running - or hurdles - hurdles!  What malevolence decreed that all school kids should be able to leap hurdles!  With my big feet, no training in technique and inability to get up any sort of speed, I was destined to fall at every one! - and signing them as from my mother.  Did the teachers ever know Mum hadn't written them?  Or were they so relieved I was sitting out that they didn't care?!  If it taught me anything, it was compassion for the kids who really, really can't do something that it's expected the whole class will do.  And it taught me - but not till later - to say "no.  I won't be doing this."

One of my heroes is a lad I knew some years ago, who, at the time I knew him (Y6-8 of primary schooling) didn't ever run in the cross country.  Unlike other kids who were "sick" on the day (why didn't I do that?!) he turned up and was most helpful in the organising, but had a note from his mother (actually written by his mother!) saying he would not be running.  He was perfectly unashamed of not taking part.  He had other gifts and in his family it was okay to have things you couldn't do, and the focus was rather on the things you did well.  One lunchtime he was in the library, and I said to him "J, run over to the office and collect the box they have there for me."  And he didn't move.  Stood looking at me with a raised eyebrow and a quizzical grin, and said "ME Mrs G?  Me RUN?  How about I walk quickly?!"
At College this boy won national recognition for his management of a sports team, which led on to international opportunities.    The things he did well, he did very well, and his family felt he had no need of humiliation to become a better person.  I heartily agree with this philosophy.

Many years after I left school, I was having physio following knee surgery, and the physio was suggesting exercises for my rehab.  "You don't run I hope, do you?" he asked.  I assured him I didn't and he showed me how my lower leg met my knee at an angle that meant I had never been intended to run.  He explained that running could result in permanent damage and said I should never have run.   Oh if only this man had written the notes to my teachers all those years earlier!

I love how the schools have adopted Jump Jam as part of Physical Education.  And cycling.  There will always be kids who love to run, and absolutely they should have every chance to.  But why inflict cross country on kids who have proved over many years that this is absolutely not for them?   Bring in yoga and dance and make sure everyone takes part in something, and leave the running to the runners!