Thoughts in a cemetery

Yesterday I spent about an hour wandering around our city cemetery.  I go there fairly often, but rarely spend so much time, but my car was getting new horseshoes nearby and I had several hours to fill in.

It's a curious thing, the cemetery.  Ours is in sections - the Old Part, with the big marble and concrete memorials; the Newer Lawn Cemetery; the lovely Rose Garden where those cremated are commemorated by plaques; the bright but depressing still-born and infant garden, and the Returned Services lawn cemetery.  There is a big white cross denoting the graves of Marist Priests, and a white marble memorial for the Sisters of St Joseph.  It's a peaceful place, on the edge of the city.

They are all there.  Every name you can think of, and a few you never would.  Isaac, Cornelius, Mary, Hezekiah, Constance, Albert, Sione, Shirley, Barbara, Catherine, Raymond, and one with Chinese (?) characters which spoke of a person far from home.  They died stillborn, a few hours, some years, young adults, right up to 104 years.  There could be older, I didn't look at them all.  The oldest tomb I saw was 1894, the newest had a mourning party and hearse gathered while I was there.  I didn't see any with occupations listed, and only a few had cause of death.  "Airplane accident".   "Childbirth".
Most of them were, no doubt, good people.  But there would be the odd bad - even evil - person, because in the end, whoever we are, we all die.

It seems strange to think that we will all end up there, and no matter who we've been, or what we've done, we'll be recorded by a tomb, a plaque.  Many of the old stones were illegible.  Some had been recently upgraded - maybe as a result of a family reunion?  I visited my friend Clare, and of course Jim, and found Dad's (after all these years, his is still never quite where I think it's going to be - 3rd row?  2nd? they DO all look alike in the RSA lawn part!).    I found a recently buried family friend in the old part, a new marker squeezed (so it seemed) between two very old tombs.  Had he bought his plot 60 years ago?  Or have the Council decided that there are some graves purchased so long ago that the owner has obviously been buried somewhere else and is now reselling them?
A cortege arrived at the crematorium, so I moved to another section.  It's probably a place where there's activity most days.

And it makes me wonder why I worry about so many small things.  No doubt many of those people there did too.  In the end, what really matters?  The plaques and monuments don't tell the story.  How many of those people struggled financially?  How many lived with illness?  With sadness at the death of a child or of someone they loved whom they thought would have lived much longer?   With disappointment at the choices made by a loved family member?

The only things that really matter are the memories left in the hearts of family and friends.  The remembrances that will be handed down and talked about when those they knew get together.

But it's good to wander in a cemetery on a lovely sunny day, and read the inscriptions and wonder about the people.  It's an extension of our community, it's part of us.


Posted by Marie at 3:18 PM No comments: Links to this post

This morning a man came up my drive, and presented me with a beautiful wooden bowl.  Not the sort of thing that happens every day, in fact I'd go so far to say that it's never happened before and is unlikely to again.  A sort of once in a lifetime event really.

Four years ago, I had an ornamental cherry tree chopped down, and someone (and for the life of me I have no idea who - maybe the person who chopped it?  who was......??!) suggested that if I didn't want the timber, they knew of a man who did woodturning who would appreciate it.

The tree was an ugly thing in the winter, having been pruned so that it had no branches except at the top, but in the summer it was a glorious umbrella. 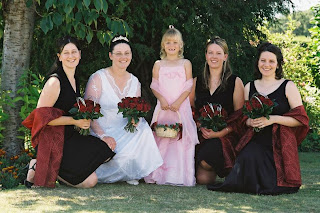 Daughter #1's pre-wedding photos taken under it, show it at the far left.

It had a lovely big straight trunk, and apparently the woodturner, George was delighted with it.

Today he brought me a bowl he'd made from it, and there is something inestimably special about having a beautiful bowl made from a tree that used to grow in one's own garden. 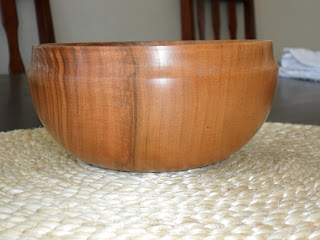 Thank you George, and may 2012 be a prosperous and happy year for you! 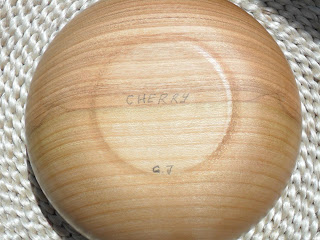