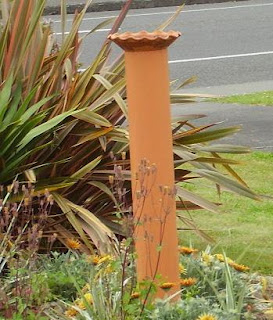 This is my fabulous new bird bath, my Object d'Art entitled "Bird Bath". Love it!

Terracotta top on a piece of recycled demolition stormwater pipe (PVC?) painted with a test pot of Resene "Tuscany" and dug about a metre into the ground. 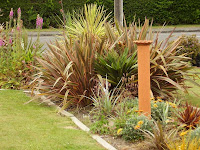 Posted by Marie at 7:37 AM 3 comments: Links to this post

Email ThisBlogThis!Share to TwitterShare to FacebookShare to Pinterest
Labels: gardening

On 1 September 1939, near the start of World War II, the German Army invaded Poland, and a month later Poland had capitulated and the country was in German hands.
The immediate task of the occupiers was to gather the Jews together - to "concentrate" them. They were brought in from the countryside and concentrated in ghettos, which, by November 1940, were sealed.

In the summer of 1943, in the Maidanek concentration camp Isaac Schiper told a fellow inmate that

Everything depends on who transmits our testament to future generations, on who writes the history of this period.

And in that camp, a group of 60 Jews organised themselves to write the history of the time, and also to attempt to preserve the poetry of their people.

Much of their work was lost. But much of it was also dug up years later - some was able to be preserved and is held as the Warsaw Ghetto Ringelblum Archives. From this has emerged "Poetry in Hell" - work that was sealed in milk cans and withstood being buried, lost and found many years later. At least one can is still missing, probably now under the Chinese Embassy in Warsaw.

This is an awesome testament to the human spirit, a testament to a people who saw plainly that the occupying nation intended to wipe them out, and who no doubt kept their hearts alight with the task of writing and saving their lore. More than 25,000 documents were found, probably at least as many more were hidden but lost.

Check out this site, and pay tribute for a moment to a people who were nearly annihilated but did everything in their power to save their culture.
Posted by Marie at 5:50 PM No comments: Links to this post